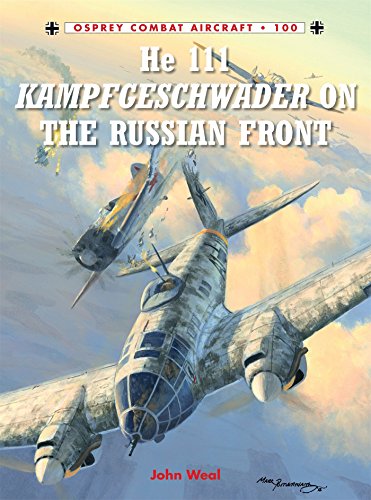 Brand : Osprey
from USA
to KUWAIT
in 5-8 days
At your doorstep by Jun 20  to Jun 23 with standard delivery

The twin-engined He 111 was the mainstay of the Luftwaffe's bomber arm at the start of World War 2. This second volume aims to chronicle its history facing a new enemy - the Soviet Union. The Ju 87 Stuka dive-bomber combined with it to provide the aerial striking power for all the early Blitzkrieg campaigns. In fact, the two aircraft enjoyed remarkably similar careers. Both swept all before them during the first 12 months of hostilities, both were found wanting when faced by the RAF during the Battle of Britain, but then both went on to gain fresh laurels and be given a new lease of life on the Eastern Front. The He 111's war against the Western Allies has recently been covered by Osprey. The He 111 bomber was in action against the Russians from the first day of the war in the east until the last. It played a part in all the major battles and was employed in a wide variety of roles - operating as a strategic bomber, torpedo-bomber (over both the Arctic Ocean and the Black Sea), train-buster, interim nightfighter and, latterly, as an auxiliary transport. Its bombing targets included the cities of Moscow, Leningrad and Stalingrad, as well as bridges, dams and the Red Army in the field. But arguably its most successful single raid of the campaign was the attack on Poltava airfield in the Ukraine, which resulted in the destruction of 44 American B-17 Flying Fortresses (and the damaging of many more) engaged in a USAAF shuttle mission. But the turning point of the war in the east had been Stalingrad, a fact neatly encapsulated by the Luftwaffe's He 111s. In the autumn of 1942 they had bombed the city flat, but before the year was out they were dropping supplies to the German army trapped in its ruins! And it would be the transport role that latterly came to dominate their activities, culminating in supply flights to beleaguered Breslau and Berlin in the spring of 1945.
Show More
Reviews

He 111 Kampfgeschwader on the Russian Front (Combat Aircraft)