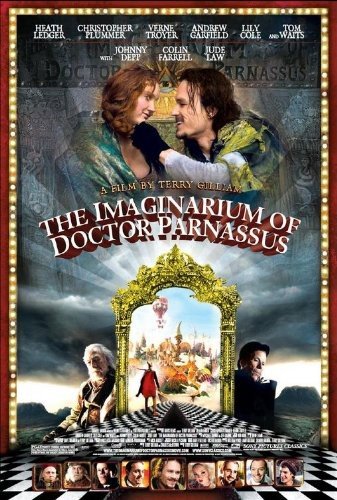 Terry Gilliam has long admired Marcel Carné's beautiful and tragic Children of Paradise (he even contributes an introduction to the Criterion Collection edition). In The Imaginarium of Doctor Parnassus, among his more phantasmagorical features, Gilliam conjures up his own unique theatrical troupe. Led by the immortal Parnassus (Christopher Plummer, whose daughter, Amanda, appeared in The Fisher King), Anton (Boy A's Andrew Garfield), Percy (Verne Troyer), and the doctor's doll-faced daughter, Valentina (model Lily Cole), travel through 21st-century London in their stagecoach set. Times are tight and the quartet is starting to unravel when they rescue Tony, a philanthropist (Heath Ledger, reuniting with Gilliam for the last time), from the Russian mob. Though Anton pines for Valentina, she falls for the new fellow, who charms female viewers into opening up their wallets. Little do the ladies realize they risk their souls when they pass through the Imaginarium, a Mylar mirror that leads to alternate realities (where Johnny Depp, Jude Law, and Colin Farrell play Tony's doppelgängers). As it transpires, Parnassus made a Faustian bargain with Mr. Nick (Tom Waits, whom Gilliam considers "America's greatest musical poet") centuries before and must supply Satan with five souls by Valentina's 16th birthday or Nick will take her away from him--permanently. One of the movie's more haunting lines, "Nothing is forever, not even death," could serve as an epitaph for Ledger, who died from an accidental overdose during filming, but lives again in the erratic, yet imaginative Gilliam's most purely enjoyable film since Time Bandits. --Kathleen C. Fennessy Stills from The Imaginarium of Doctor Parnassus (Click for larger image)
Show More
Reviews

The Imaginarium of Doctor Parnassus [Blu-ray]